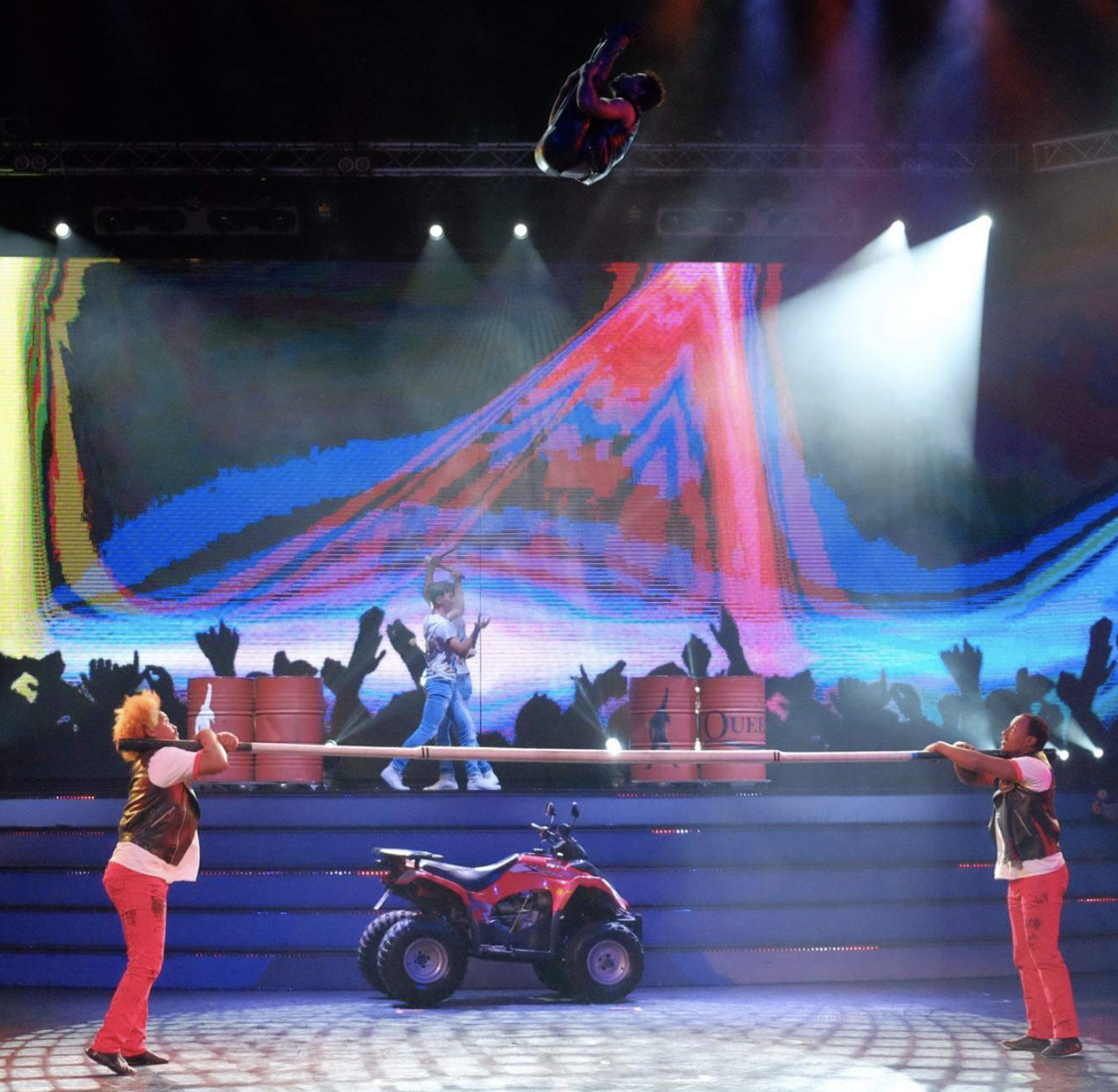 From Ethiopia , The Russian Bar New brothers is born from the circus company  Addis Africa Circus. The performers are Dejene kene, Yonas Teka and Tewodros Alemayehu. They have performed many shows in the last three  years all over Europe, Northern America and Russia. 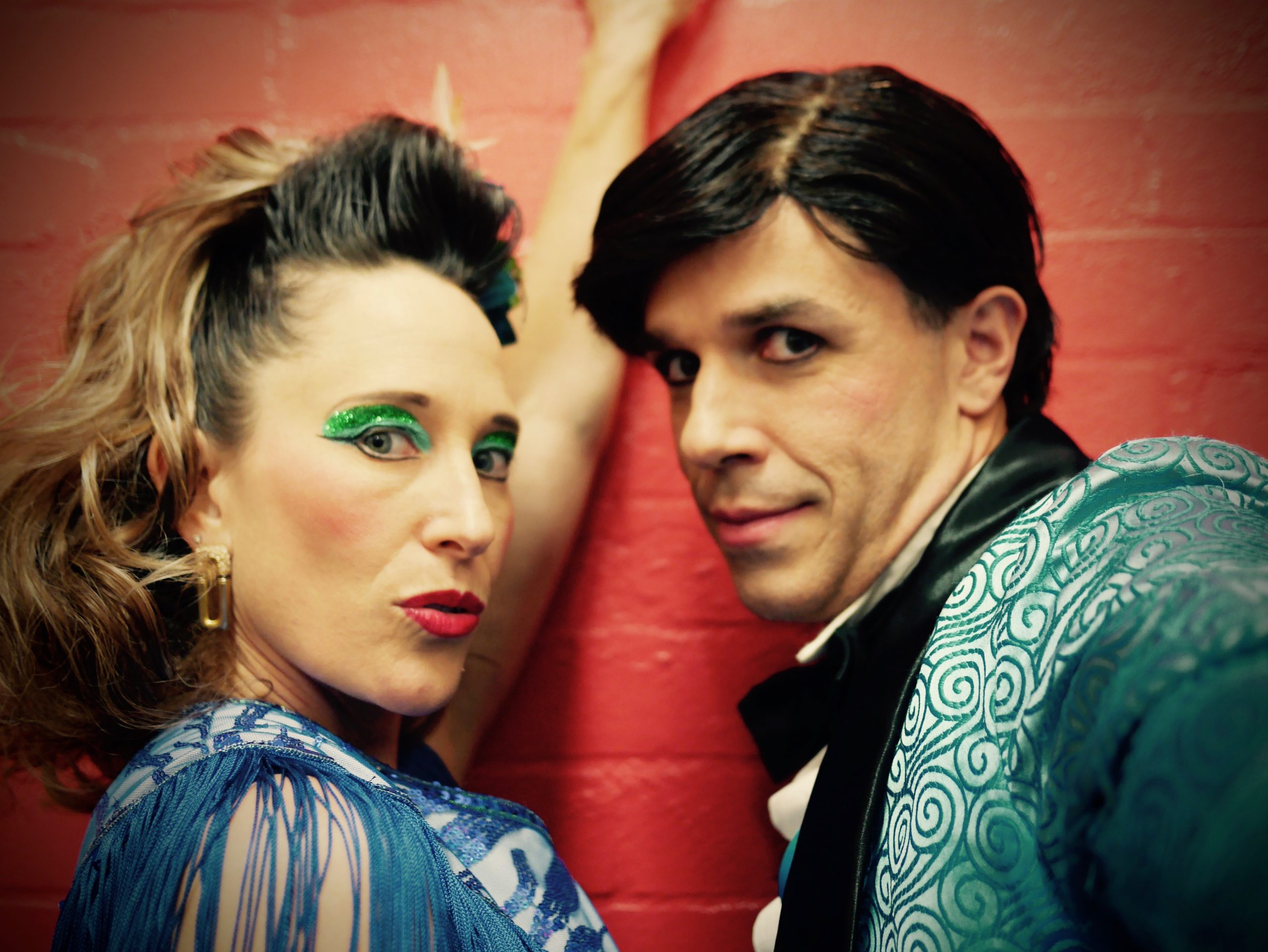 Anne Goldmann & Jonathan Taylor started performing together when
they ran out of money on their honeymoon in Spain. They made a street show and
performed it on ‘Las Ramblas’ in Barcelona. They have kept their honeymoon
going ever since; creating and performing their signature routines around the
world at festivals, theater, circus and television. Their unique brand of comedy
combines their original characters with quick change magic, mouth-juggling
bananas, comedy acrobatics, singing and puppetry.

Swimming in the waters of classic vaudeville and cresting the wave of in-
your-face interactive madness, Daredevil Chicken’s performances will test the

lines between reality and absurdity, humor and taboo. 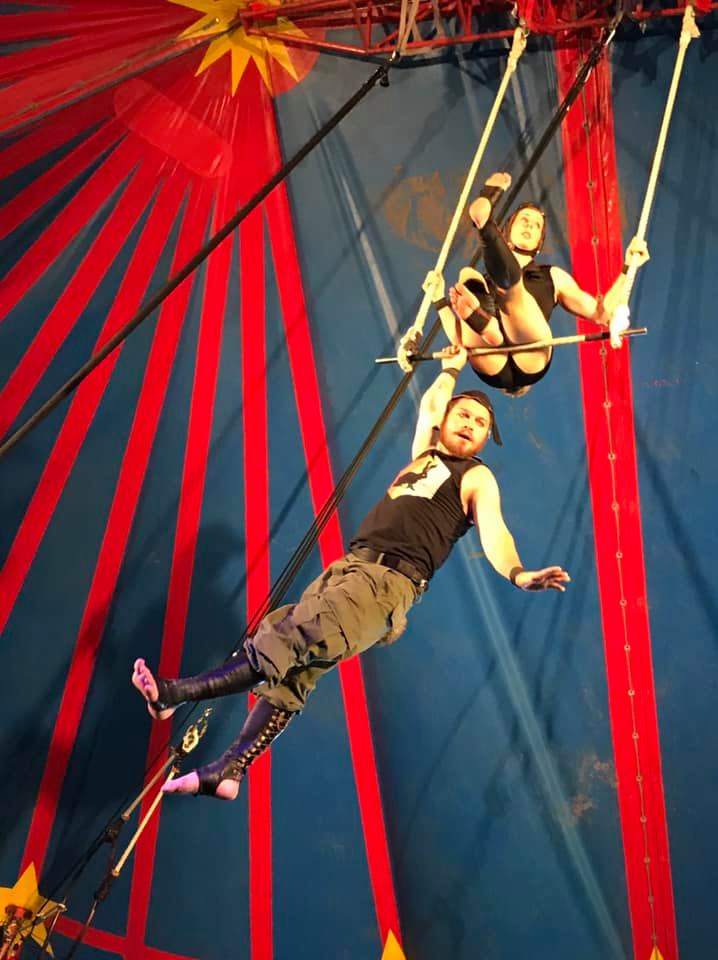 The Daring Jones Duo (consisting of the married David Jones and Blaze Birge) trained with a 5th generation Romanian circus family. After their initial training, they returned to Northern California to refine their skills and develop their signature double trapeze act in 2004. The isolation of their environment contributes to the originality of their bold choreography and lends a quality best described as “heart in throat”. Combining speed, power and technical mastery they strive to inspire audiences with disciplined artistic and athletic risk. With adventure as their primary criteria, the Daring Jones Duo has featured in both traditional and non- traditional circus all over the world.  Their newest developments include knife throwing and sharp shooting.  Daring Jones Duo has over 15 International Medals, most recently winning 1st Place in Las Vegas and the Silver Crane at the Wuhan International Circus Festival in China. 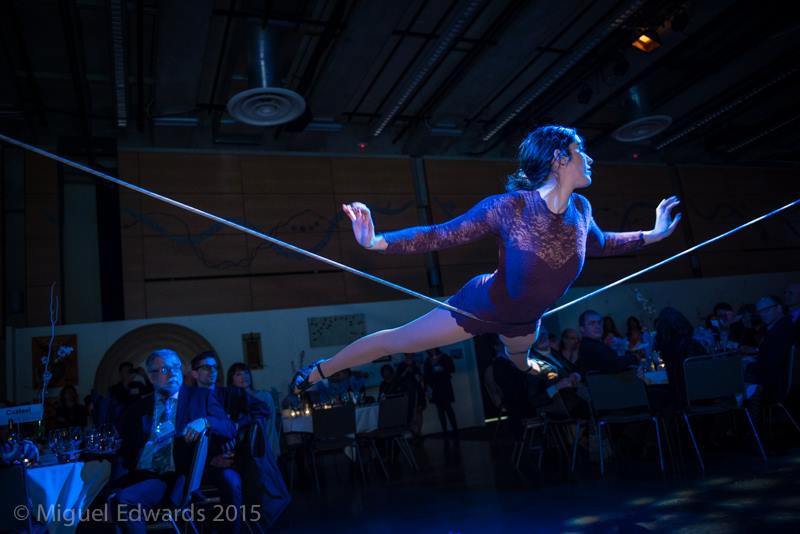 Esther de Monteflores is an American circus artist, physical performer and choreographer. Esther is one of a tiny handful of circus performers in the USA specializing in slackwire walking. In her work, Esther seeks a balance between technical skill and expressive movement.

This is Esther’s first season touring with Flynn Creek Circus and she is thrilled to be back in her home state of California. 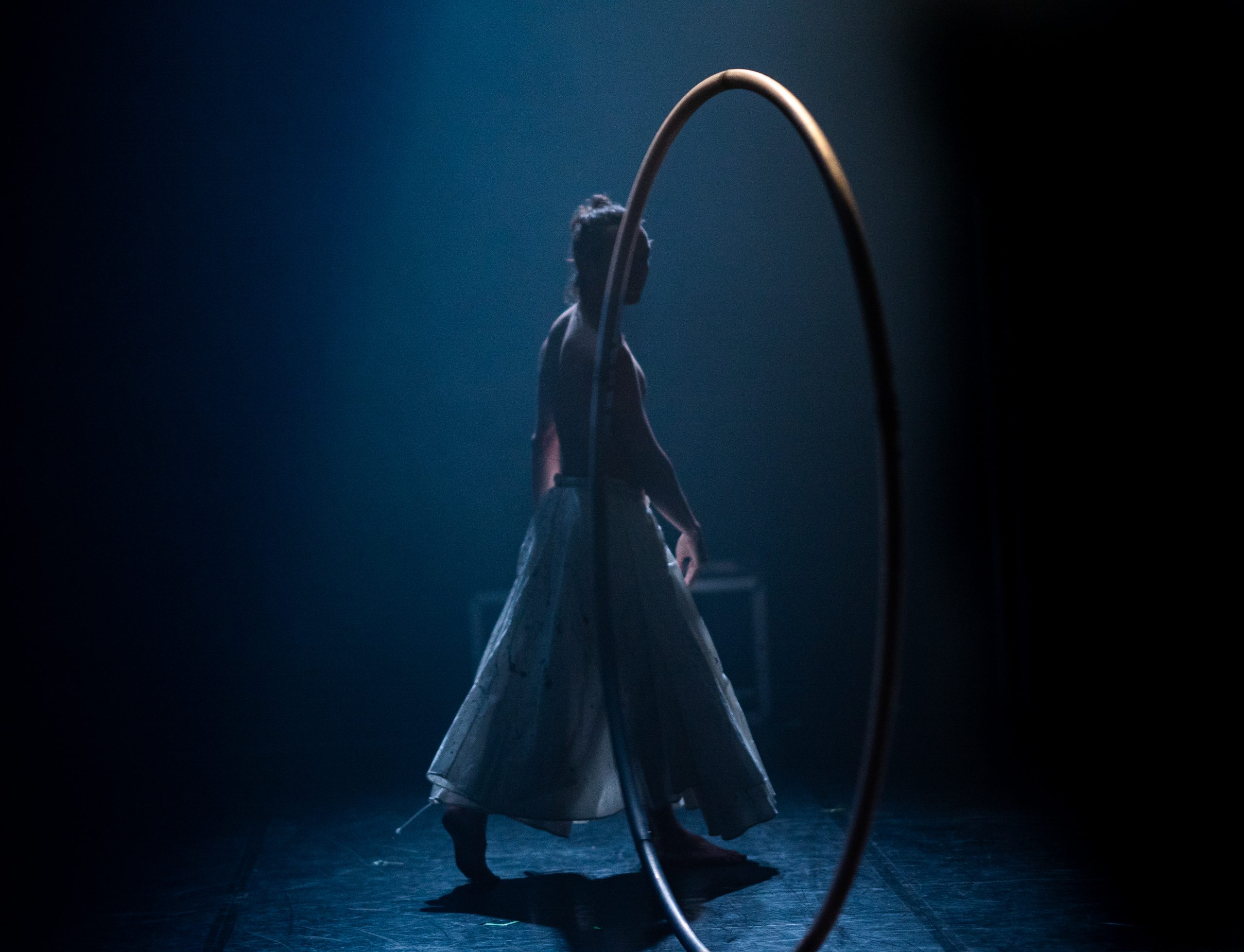 Raphael trained in Geneva’s circus school « Théâtre-Cirqule »
and at the national circus school of Rosny-sous-Bois (France),
where he specialized in floor acrobatics, trampoline and single
wheel.
After graduating in 2008, he immediately set up for a nomadic
life, eager to meet different acrobatics cultures and experiment
as many ways of performing as possible.
Sixty-six countries later he has performed with more than 20
different companies, among them the Circus Monti for its 2011
tour (Switzerland), the Teatro alla Scala (Milano), Barcode
circus company for Cirque au Sommet 2019, Comiqu’Opéra,
Adn Dialect (Ch) companies Bam, Entr’act and 36 du Mois
(France), La Putyka (Czech Republic), Collectif and Then…
(UK), and made some replacements in 7 fingers’ Fibonacci
Project and contemporary dance companies L’éolienne, Yann
Lheureux, (France) and Estelle Clareton (Canada).
In 2016 he creates his own company, « l’Étranger », currently
producing his first show « Zemlja », in collaboration with
slovene sculptor Lučka Kosčak.
Raphael has also been invited to teach acrobatic movement
workshops in places such as Geneva, Prague, Seattle, Mexico,
Cambodia, Nepal and New Zealand. 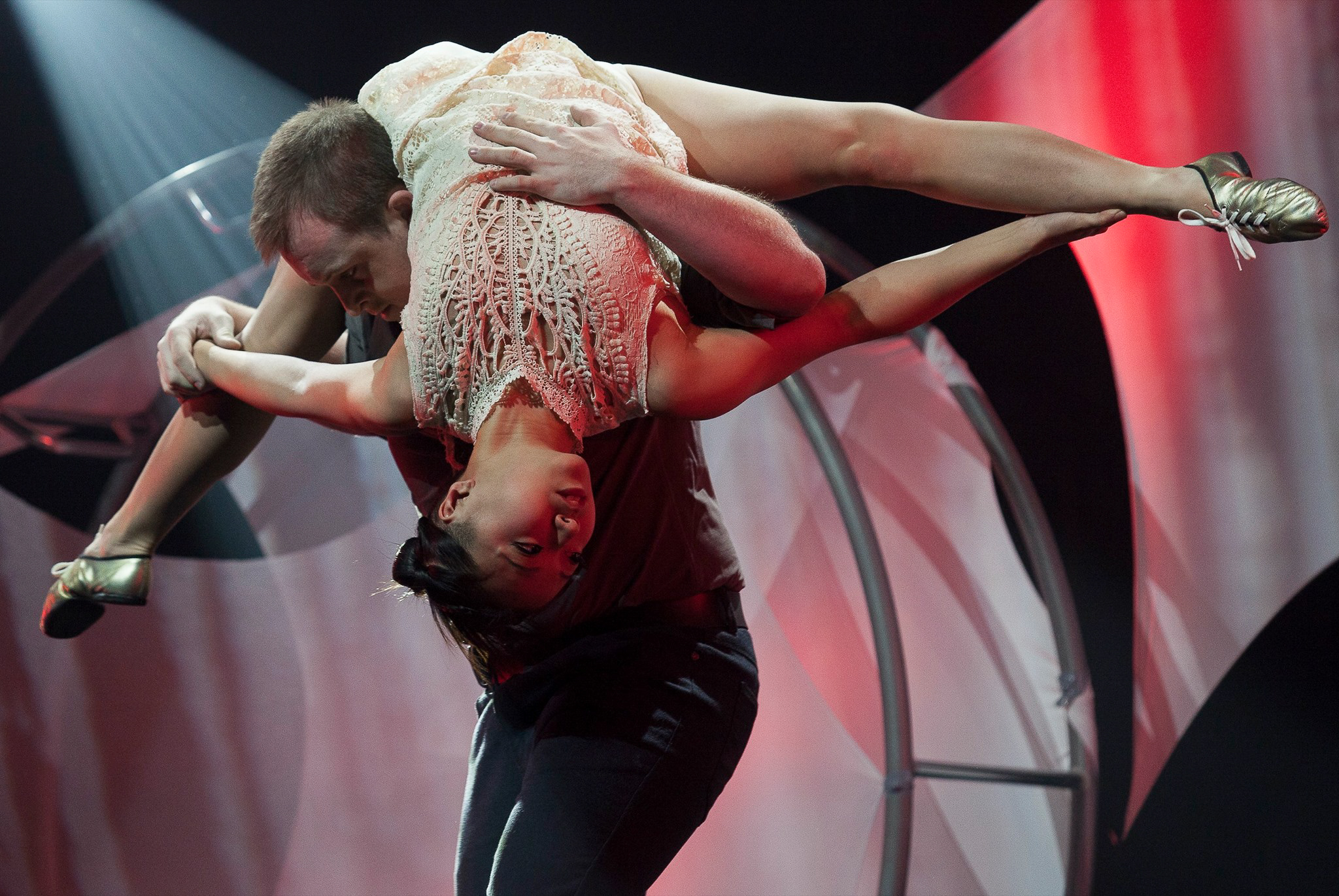 Originally from Japan and England, with a combined 30 years experience in circus, Arisa & Norbi started working together in 2015.
Two personalities from either side of the globe, with a shared love of creation and originality, have since traveled to more than 20 countries around the world thanks to their performances.

Vivianne Keene is an aerialist from Mendocino county.  She is sixteen years old and has been training and performing with Circus MeCCA (Mendocino Center for Circus Arts) for the past nine years.  She headlined at the annual AYCO (American Youth Circus Organization) festival in August 2017 and competed as an Emerging Pro at Vivafest in February 2018, taking 1st in the aerial straps category and 2nd place overall, earning a guest appearance as a soloist in Cirque Mechanics’ Cabaret. Vivianne performed with Flynn Creek Circus as the Magicians Muse in Out of Hat 2019. Though her primary apparatus is the aerial straps, she also has experience on the silks, hoop, and rope. 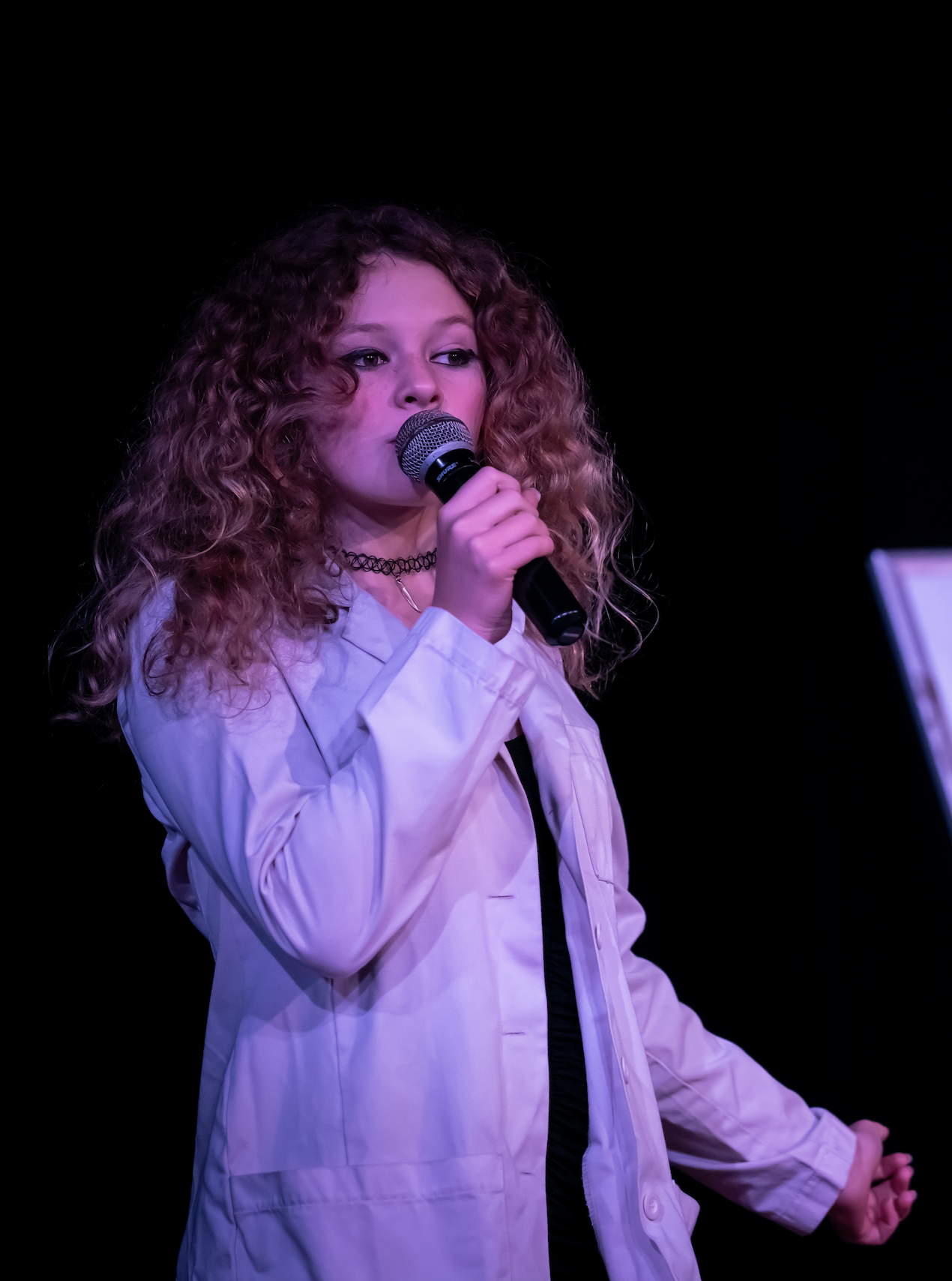 Jacy Jones was born in 2007.  She has curly hair and hazel eyes that add to her wild look. If you were to present her with a book that had even the slightest mention of fantasy, it would be read by sunrise. Jacy, do to being an only child of a traveling circus family, has developed a knack for creativity in any sort of writing and more (songs, stories, new tricks, etc). Jacy’s favorite animal is as always a cat, her favorite color combination is bright red and white. She enjoys experimenting with baking and swimming in any sort of natural water. #ilovecats(: 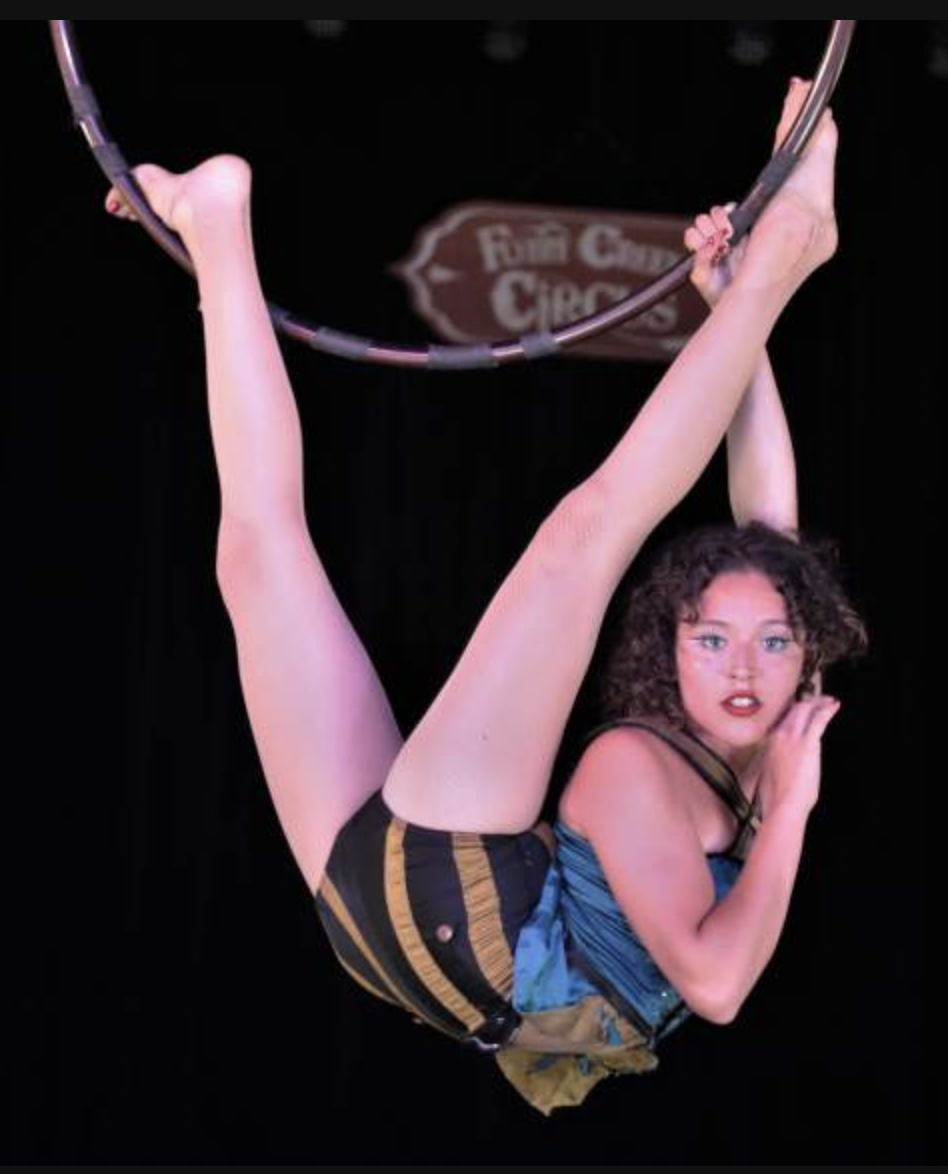 “I’m so glad I get to share my passion for this art form, I’m living what I love to do.”

Maya’s training began early with CircusMECCA,  rounding out her skills at Ecole Nationale de Cirque in Montreal, and benefiting greatly from the opportunity to work with and learn from Blaze and David (Daring Jones Duo) of Flynn Creek Circus.

Maya is a Mendocino Coast native, Aerialist, aspiring contortionist and Vocalist with Background in Theatre Arts.

She enjoys sharing her knowledge and skills to her young aerial students in Mendocino and Santa Rosa.  When she is not training, performing, or teaching, Maya enjoys photography and off roading in her project Toyota 4Runner. 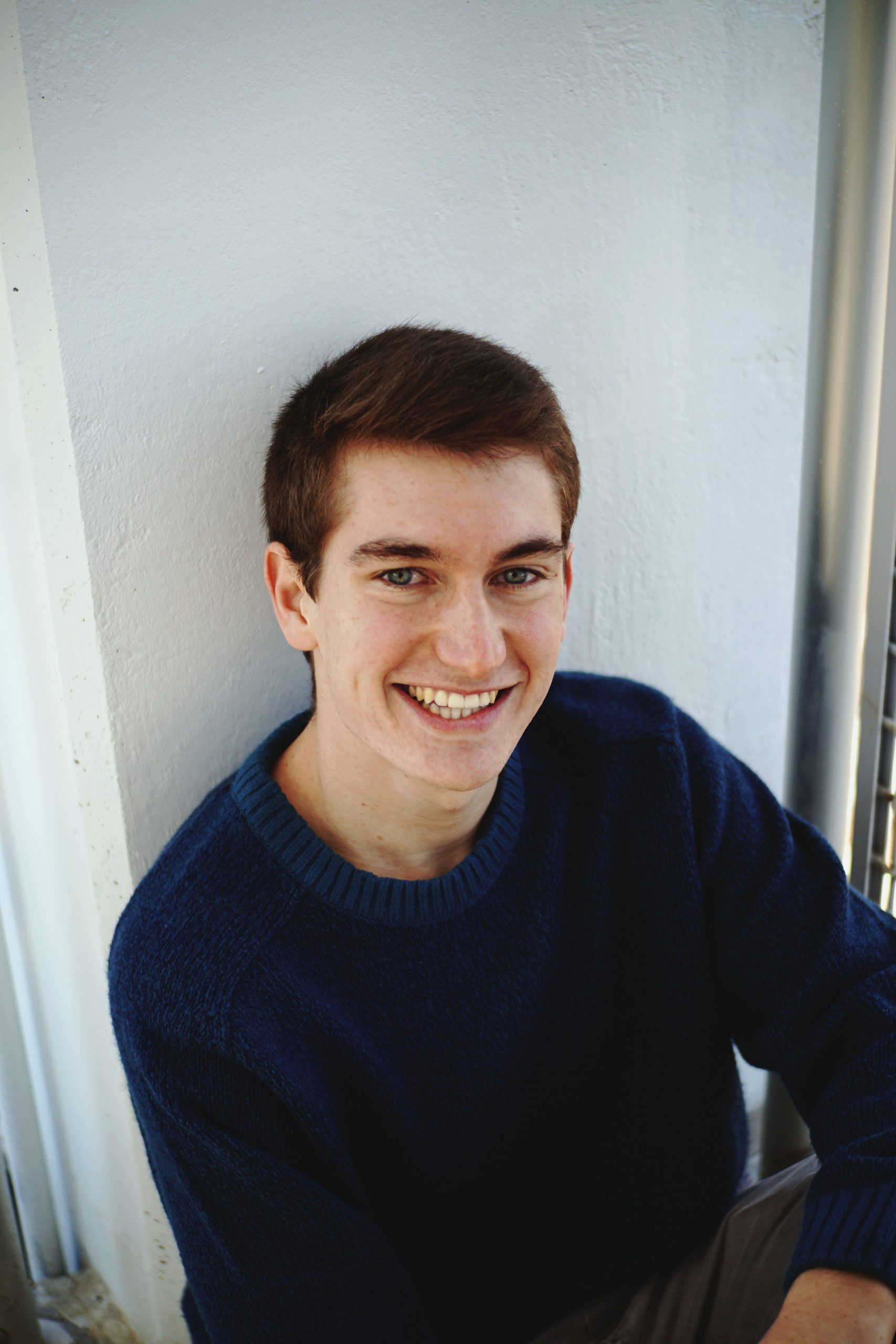 Cole Moore is a 2020 Apprentice awardee with a focus in acrobatics and parkour.  He is still finishing his studies at FSU and will be taking a short sebatical to train with the Circus. 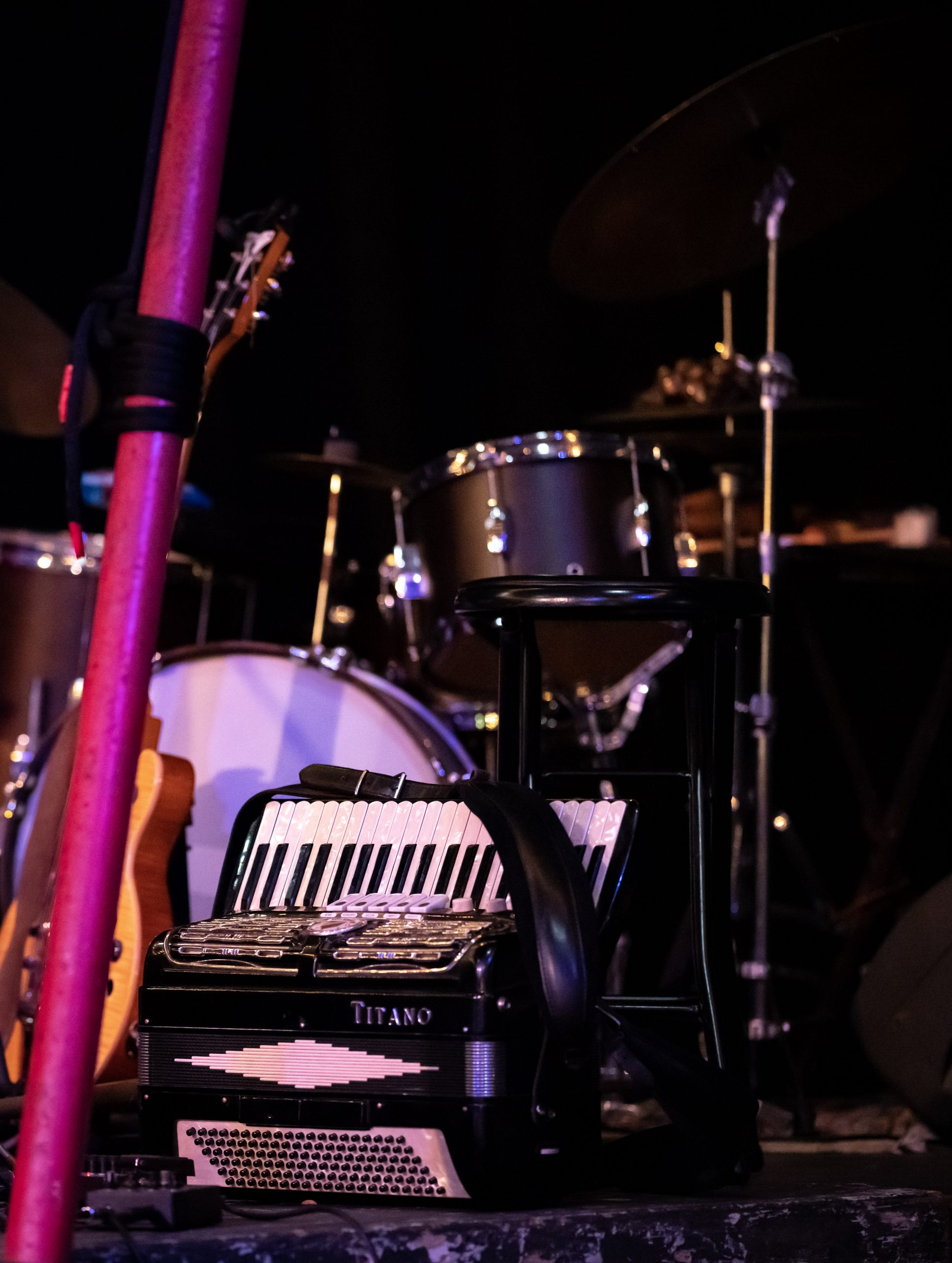 Kalei Yamanoha– Kalei Yamanoha is a musical oddball based out of Hale’iwa, Hawai’i and has spent the last few years living in New Orleans performing full-time. Having a passion for scoring live performance has led Kalei to compose for many plays, avant-garde theater, puppet shows, and circuses for which he writes and performs original scores. Kalei has toured extensively for the last ten years with various projects both nationally and internationally. Kalei is also a professional accordion repair person, having apprenticed under Skyler Fell at Accordion Apocalypse. Kalei is excited to be leading the band for this years Flynn Creek Circus season and is excited to provide the soundtrack for all of the amazing performances.

Zak Garn is a drummer with over 15 years of performance experience. He has toured internationally and domestically, worked with rock groups, marching bands, jazz and punk ensembles and recorded on two full length albums. He completed his BA in music at UC Berkeley where his studies with pianist and composer Myra Melford focused on musical improvisation techniques. After completing last season’s superb tour with the Flynn Creek Circus he moved with his fiance to New Orleans where he continues to work as a drummer. He is excited to be returning to the circus for another year of organized mayhem, revelry and a one of a kind, spectacular show.

Kala Chandra is a musician living in New Orleans. He plays clarinet, soprano and alto saxophone, guitar and sings as well. He has traveled to various parts of the U.S. learning styles of traditional American music  Kala is now studying and playing Traditional Jazz and Swing primarily in the city of New Orleans. 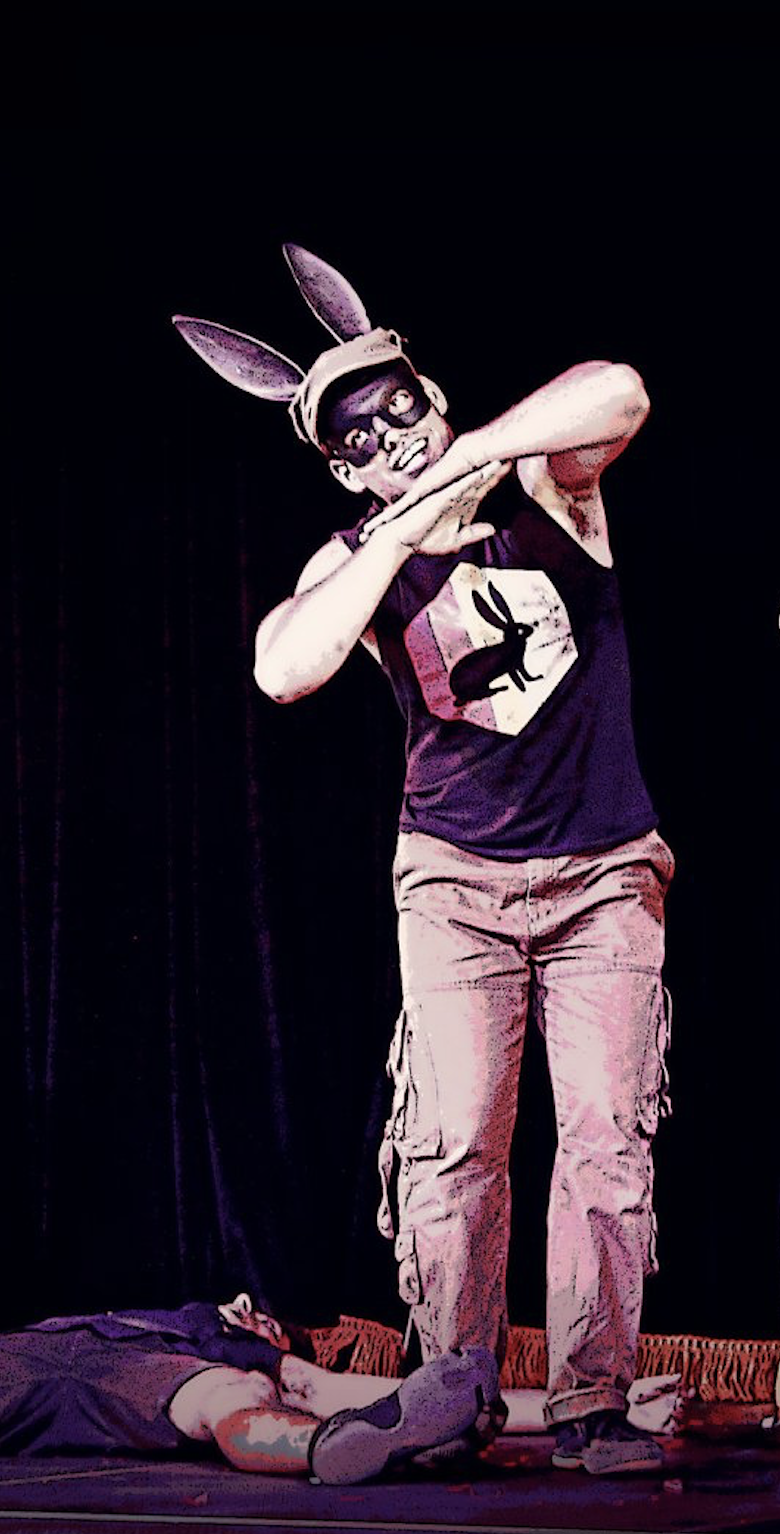 Frederick Andersen is 21 and has been touring with Flynn creek circus for five years now. He’s been working with tents for over ten years through different companies and enjoys every minute of it. This year he is the lighting designer while also fixing and maintaining most of the equipment. 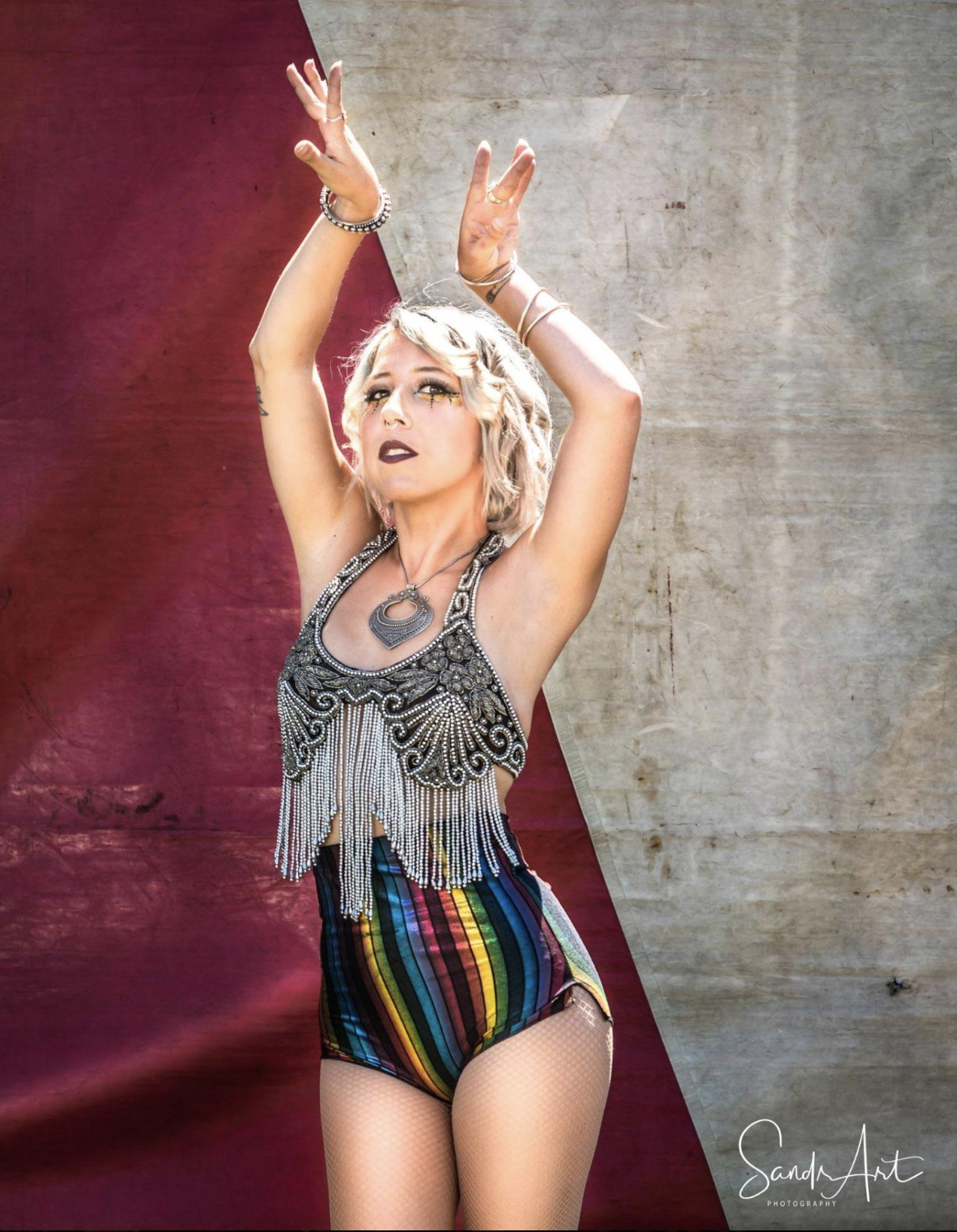 Madeline is a Florida native hailing from New Orleans where she lives with her drumming fiance (who you’ll see on stage in the FCC band). You won’t see her under the bright lights as she’s behind the scenes working with the marketing team. She’s been working in the field of marketing and sales for the last 5+ years. She is a creative thinker not tied to going the ‘traditional’ route and prides herself on being a guerrilla marketing, low-budget strategy developer. Her marketing role with FCC pulls on her strengths of in-person sales, community building, and forming sustainable partnerships. Visit her behind the bar and tell her thanks as she’s one of the folks who helped solidify the alcohol sponsorship.

Drew Young is a 2020 Apprenticeship Awardee.  Her area of interest is in cosutme design.  This season, she will be working to develop her design skills with the limitations imposed by acrobatic movement.  Drew will also participate in learning lighting and sound operating skills.

Meet our 2020 cast (in no particular order)…  Talented artists from all over the world will entertain you with their well practiced and original works adapted to a fairytale storyline.  A flamboyant unicorn and his publicist try to save the youth by bridging the kingdom beyond the horizon to the world.  Thwarted by the mischievous weaver and the thieving Ravens, and upstaged by his back end at every turn, our Unicorn’s journey takes  a bumpy road. 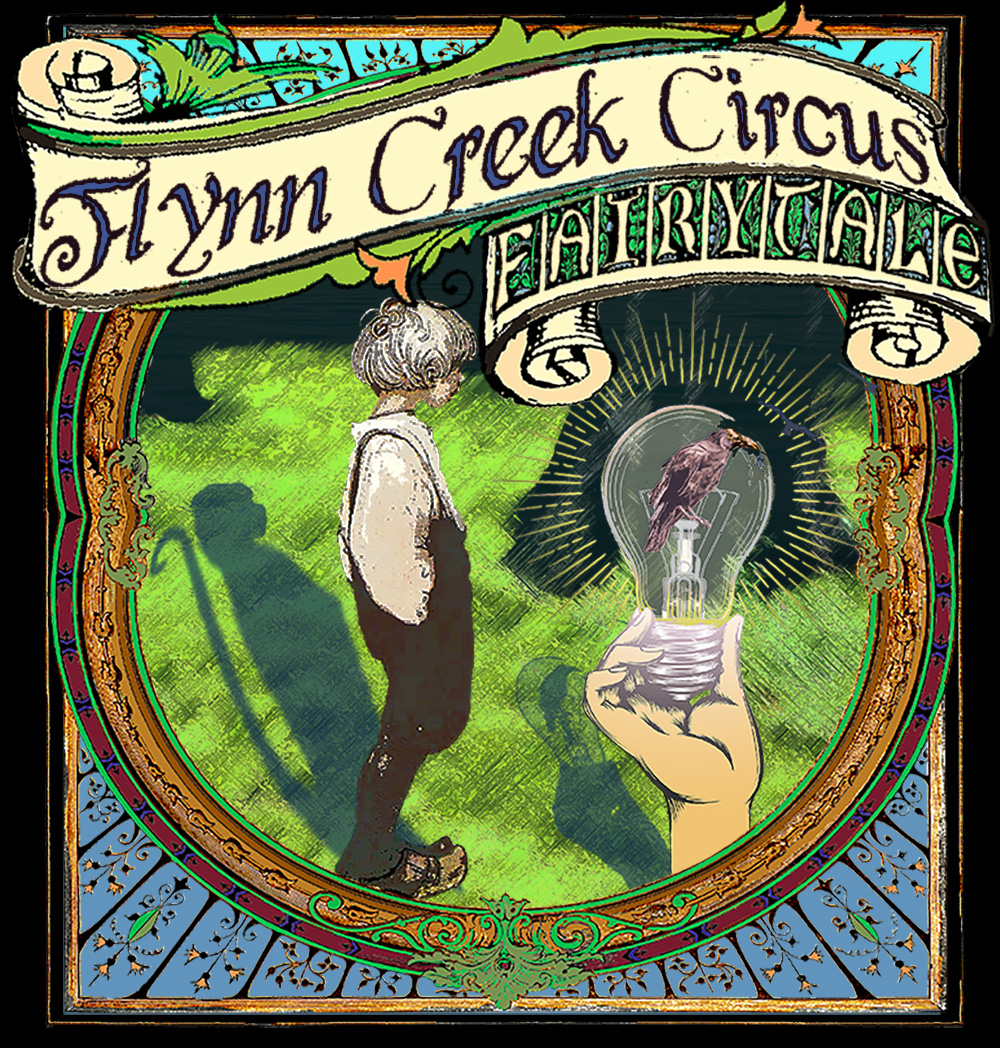